Before the 2012 US Open Women’s final started Andre Agassi was inducted into the Court of Champions. END_OF_DOCUMENT_TOKEN_TO_BE_REPLACED How much does patriotism impact which tennis players you support?

If you’d asked me that question in 2005 my immediate answer would be “not at all”. That was the year I was told I was “un-patriotic” by a nameless stranger in a Melbourne bar END_OF_DOCUMENT_TOKEN_TO_BE_REPLACED

The AAMI Classic 2012 started today… eventually… after a few stops and starts due to classic Melbourne summer time rain and unpredictable weather. END_OF_DOCUMENT_TOKEN_TO_BE_REPLACED

Today the AAMI Classic arranged a player meet and greet at Federation Square. 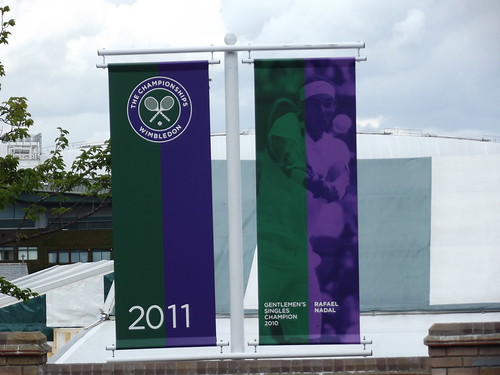 Seemed to me there were more beards than usual this year, Murray and Lopez for example. And am I the only person thinking that Wimbledon needs more than one court with a roof? END_OF_DOCUMENT_TOKEN_TO_BE_REPLACED

Andy has a new do for the Australian Open 2012. Here’s a pic that I took of him during the AAMI Classic player meet and greet at Federation Square in Melbourne. Andy's mohawk for the Australian Open 2012

Andy’s thinning hair is oft talked about and when the cap accidentally came off to show the current state of affairs during the final of Memphis 2011, it seems there is a reason why he keeps it on nowadays. Hat's off to you Andy

Let’s go back to the beginning though as it wasn’t always this way. I’ve been a fan of Andy Roddick for a long time now. I don’t quite remember the exact year but I first saw Andy with his awesome serve on Margaret Court Arena at the Australian Open in the early 2000s.

And his Quarter Final against Younes El Aynaoui at the 2003 Australian Open is my all time favourite match.

Even though it bothers me that Andy can go way overboard making his point to the chair umpire and lines people if he disagrees with them, (far out, remember the Brissy International 2011, when the rain crept on to the court, the rant went on for far too long), I still have all the time in the world for him; a genuine, good hearted guy who has done the hard yards in the tennis arena.

After winning Memphis 2011 Andy Roddick became the third man on the ATP tour to hold 30 or more championships. Not bad really, but of course there is still the talk and discussion over whether or not he has more Grand Slam titles up his sleeve.  He won the US Open in 2003, when he was 21, and has been runner up in the final a few times since, beaten by Roger.

Here are some flash back pics of Andy through the ages.

The young Andy, with his lush spikey hair The Andy who went out with Mandy.

Gosh at the time how I loved the rhythm of the rhyme.

And now, Andy and Brooklyn. As a Linesman at the Rally for Relief in January

This pic still puts a smile on my dial.

He’s still got it though, check out this match point from Memphis

Check out the winning match point in this vid, which he called “the  best shot I’ve ever hit in my life”.

You’ve gotta agree that he’s still got it, hair or no!

I’m hoping for big things. Serve it up Andy! What do you think Andy’s chances are of winning another Grand Slam?