This time last year I was in New York, ready for the US Open. If you’re going in 2014, here are my best tips. 1. If you’re in NYC the week before the US Open, go to Qualifying

This year the qualifying tournament runs from Tuesday 20 August to Friday 23 August.

We went on the Friday of qualies last year and looking back, it was one of my favourite days. 2. Get an Arthur Ashe ticket for the Night Session on Day 1

Prior to this session there are fireworks, a light show and entertainment. I loved it! 3. Be ready for extreme weather conditions. Heat. Rain. Possibly even a tornado.

There is very little shade around the US Open grounds. You can go into a shop or a bar, or if you’re lucky you might get a table shaded by an umbrella in the food court area. But none of these shaded options let you watch tennis and there aren’t many shaded courtside seats.

During the day wear sun protection; sun screen, hat, long clothes and bring a plastic water bottle that you can refill.

Although it can still be really hot during the night sessions, at least you can’t get sun burnt and, as mentioned in the next tip, play goes really late during the first week so you can still see a lot of tennis in the evenings.

When it rained, which fortunately wasn’t for too long, we huddled at the side of Arthur Ashe Promenade or around the sides of Louis Armstrong. If rain is expected, bring a coat and something to wipe your seat dry if play resumes.

Although I’ve experienced a lot of extreme heat (think AO) and rain (Wimbledon) during live tennis watching, the US Open 2012 was the first time I’ve been evacuated due to a Tornado warning. So be prepared for anything.

4. The Ground Pass is a great ticket during the first week

Although the US Open Ground Passes are expensive compared to other tournaments ($64.50 on Day 1*, $76 on Day 5 and it looks like they are sold out for the middle Saturday and Sunday) there are a lot of matches going on during the first week.

The Ground Pass gets you in everywhere except Arthur Ashe Stadium and all courts have lights so play goes late and you can see a lot of tennis (especially if you can handle the heat in the day time and then stay on into the night).

* As a comparison Arthur Ashe Promenade tickets are $82 for the Day 1 day session.

Read more about the ticket prices at each Grand Slam. 5. Different rounds are played on the same day

During the first week, there can be different rounds being played on the same day, even if there hasn’t been weather delays. For example on the first Wednesday there are both Round 1 and Round 2 matches scheduled.

I think that the US Open is the only tournament to schedule like this. At first my brain could not compute what was going on when I was looking for certain matches that I thought “had to be on the Tuesday” but were actually being played on the Wednesday.

6. Don’t expect schedule changes to be updated on the US Open website or App quickly

I can see that the US Open have made big changes to their website since last year and it would be awesome for fans if they have also addressed this issue. But in case they haven’t you should be aware of it.

The schedule changes regularly but don’t expect the changes to be reflected quickly on either the website or the US Open app. You’ll probably be entering the court of the match you expected to see before you realise that someone else is playing or a match has been moved to a different court.

For example one night I headed to the subway to get to Flushing Meadows, expecting a doubles match to be on Arthur Ashe which would give me plenty of time to get there in time for the Men’s match. But by the time I got to the grounds the Men’s match was half finished because the doubles match had moved to a different court. The website and App both showed the original schedule.

7. There is free stuff galore

We went to 16 sessions of the US Open last year and could have used an extra suitcase to bring all the freebies home.

Mainly cups to be honest. The US Open souvenir cup that comes with the Signature cocktail makes a great memento!

Also take advantage of the promotions that US Open sponsors run for their customers on site.

8. Adhere to the bag restrictions and be aware of what you can’t bring in to the grounds

Read details of what you can, and can’t, bring in.

If your bag isn’t allowed in, you need to leave the entry queue, go to the Bag Check queue to check your bag then return to the back of the entry queue. Not a great way to spend time when you want to be watching tennis.

Also note that if you don’t bring a bag, you can skip the bag check queue. 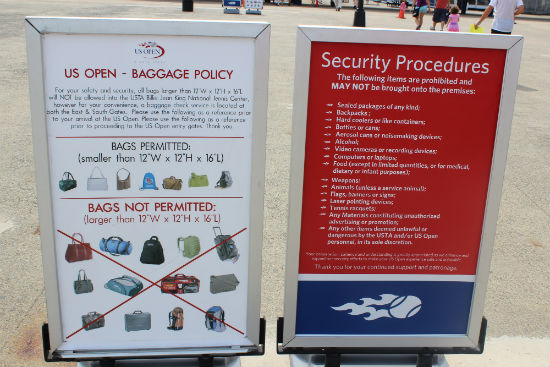 9. Try to avoid the area around Arthur Ashe stadium if the Day Session runs past 7pm

Night session play starts at 7pm, or 40 minutes after the Day session ends. If the Day session runs close to or past 7pm, due to the crowd try to avoid being near the stadium when the Day Session people leave and the Night Session ticket holders are waiting to get in. If you’re one of the Night Session people, think about going to the Food Court or have a look around other parts of the grounds for ten or fifteen minutes until the bulk of the crowd clears.

Night session ticket holders are allowed in to the grounds from 6pm. If you arrive before 6pm, the line to get your bag searched by security can be quite long as there aren’t many bag searchers for the number of people. Consider not taking a bag, or arriving around 6.30pm.

10. If you’ve had tickets for another Grand Slam Tournament Centre Court, don’t expect the same experience in the Arthur Ashe Promenade

Don’t expect to be able to hear the “crack” of the ball being hit.

Don’t expect the Wifi to work that high up.

Do expect people to block your view and ask you take a photo of them.

Do expect people to talk constantly and loudly, to their friends and on their phones

Do expect music and dancing during the change of ends.

Once you realise that it’s a different kind of grand slam tournament ticket, enjoy it.  Wish I was there! I still laugh at some of the comments I overhead in the AA Promenade, like “is Federer still playing”.

And actually, the talking decreases and the crowd involvement with matches increases as the draw progresses. Seeing Serena and Andy win their finals in 2012 was a fantastic, memorable experience. Please leave me a comment and let me know what your experience was like. And also you have other tips for US Open visitors I’d love to hear them.